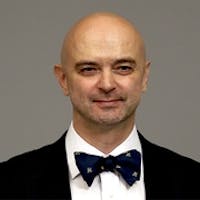 Alexander Storozhuk, professor of the St. Petersburg State University, head of the Department of Chinese Philology.

Was invited as a guest-lecturer to different universities in Russia and abroad. PHD (1996) and Advanced PHD (2006) in Asian and African studies.

Chairman of the St. Petersburg Union of Chinese Studies.

Chairman of the St. Petersburg Association of Former Students of the Chinese Universities.

Member of the European Association for Chinese Studies

Member of the All-Russian Association for Chinese Studies

Translator of classical (Tang) poetry and prose into Russian.

Member of the jury of the all-world Hanyuqiao (汉语桥) competition (2012). Author of numerous articles and books on traditional Chinese culture, including monographs on Tang poetry and philosophy, on Chinese calligraphy, on traditional philosophy and folksy beliefs.