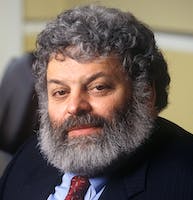 R. Edward Freeman is University Professor and Elis and Signe Olsson Professor of Business Administration; Senior Fellow at the Olsson Center for Applied Ethics and Academic Director at the Initiative for Business in Society at the University of Virginia Darden School of Business. He is Professor of Religious Studies and a Faculty Advisor to the University's Institute for Practical Ethics. Freeman is also the Academic Director of the Business Roundtable Institute for Corporate Ethics. He holds positions as adjunct or visiting faculty at Copenhagen Business School (Denmark), Nyenrode Business School (Netherlands), Monash University (Melbourne) and the International Center for Corporate Social Responsibility at Nottingham University. He has held honorary appointments as the Welling Professor at George Washington University and the Gourlay Professorship at University of Melbourne. Prior to coming to The Darden School, Mr. Freeman taught at University of Minnesota, and The Wharton School, University of Pennsylvania. His latest book is Stakeholder Theory: The State of the Art, published by Cambridge University Press in early 2010. Managing for Stakeholders: Survival, Reputation and Success, was published in 2007 by Yale University Press. Freeman is perhaps best known for his award-winning book Strategic Management: A Stakeholder Approach, originally published in 1984 and reprinted in 2010 by Cambridge University Press, in which he suggests that businesses build their strategy around their relationships with key stakeholders. Mr. Freeman has a Ph.D. in Philosophy from Washington University, and a B.A. in Mathematics and Philosophy from Duke University. He was recently awarded an honorary doctorate in economics (DHC) from Comillas University in Madrid for his work on stakeholder theory and business ethics. He has been honored with teaching awards from Wharton, Minnesota, Darden, UVa, and the Commonwealth of Virginia. Freeman teaches Business Ethics, Creative Capitalism, and the popular "Leadership & Theater: Ethics, Innovation, and Creativity." He is a lifelong student of martial arts, philosophy and the blues. He is a founding partner in Red Goat Records

New Models of Business in Society