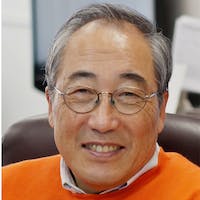 The research area of professor Yang-Hann Kim is mainly acoustics, noise/vibration. Experimental approaches and associated digital signal processing are used the most. Research projects include sound field visualization, noise source identification using array microphone, detection and estimation of moving noise source, structural acoustics, duct acoustics, silencer design, diagnostics of machines, and active noise/vibration control. Recently, he has been recognized as a pioneer in the field of sound visualization and manipulation. The latter is to make any sound field or shape in the selected region/regions. Therefore, it can be used for having very focused sound field, private sound zone/zones, or 3D listening field. He joined the Department of Mechanical Engineering as an Associate Professor in 1989. Previously he worked for five years at the Korea Institute of Technology as an Assistant and Associate Professor of the Department of Mechatronics. From 1979 to 1984, he was a research assistant at the Acoustics and Vibration Laboratory of Massachusetts Institute of Technology while pursuing Ph.D. degree in the field of acoustic and vibration, and obtained Ph.D. in February 1985 at M.I.T., Mechanical Engineering (O.E. Program). He has been on the editorial board of Mechanical Systems and Signal Processing (MSSP), editorial advisor of the Journal of Sound and Vibration (JSV) and Journal of Noise Control Engineering. He also served KSNVE as an editor for three years (1995 - 97). His research has been recognized in the professional societies and institutes in many respects, including the bet paper award by KSNVE (1998), the best research award by ASK (1997), second place award in the sound visualization competition by the Acoustical Society of America (1997), the best international cooperation award from KAIST, and KSNVE, and the best teaching award from KAIST, department of M.E (2010). He is elected as co-chairman of inter-noise 2015, San Francisco, also a director of I-INCE, and Distinguished Foreign Member of INCE/USA. He is a Fellow of the Acoustical Society of America and recipient of Rossing Prize from the Acoustical Society of America. He is also an editor of Noise Control Engineering Journal(NCEJ), ASIA starting from Sept. of 2014. He has published more than 100 papers, mostly in the field of sound visualization and manipulation, in the well-known journals, including the Journal of the Acoustical Society of America, Journal of Sound and Vibration, and Journal of Acoustics and Vibration, the Transaction of ASME. He is an author of well-known acoustics texts, Sound Propagation: An Impedance Based Approach and Sound Visualization and Manipulation (coauthored with Jung-Woo Choi), published by John Wiley Sons, Inc. He also wrote the chapter “Acoustic holography” in the Handbook of Acoustics, published by Springer Verlag.