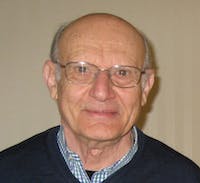 Peter Kenez, Ph.D., is a Professor Emeritus in the History Department at the University of California, Santa Cruz. A founding faculty member of UCSC's Stevenson College, Kenez received his Ph.D. from Harvard University. He has been teaching Russian and modern European history at UCSC since 1966.

Mr. Kenez’ research interests include Russian history, Eastern Europe, 20th-century Europe and Soviet film. At UCSC, he has taught courses in each of those areas, as well as Modern European History, the Holocaust and Jewish social history. He is the recipient of an Excellence in Teaching award.

Kenez is a native of Hungary and a Holocaust survivor. He is the author of eight books, including A History of the Soviet Union from the Beginning to the End and the autobiographical Varieties of Fear: Growing Up Jewish Under Nazism and Communism. His most recent work is entitled From Antisemitism to Genocide; the Origins of the Holocaust.

Russian History: from Lenin to Putin

The Holocaust: The Destruction of European Jewry

Odesa: Jews in the Modern World